Professor Oliver Scharbrodt is a German-born professor of Islamic studies at the Faculty of Religions at the University of Birmingham, UK. He married a Jordanian woman living in London, 12 years ago and became a Muslim.
He chooses “Comparison of Egyptian Islamist Muhammad ‘Abduh with Abbas Abdu’l-Bahá, the second leader of the Bahais, in connection with the Islamic reforms” as his doctoral dissertation during his Ph.D. studies in the School of Oriental and African Studies.
This dissertation published in 2008 entitled as Islam and the Baha’i Faith: A Comparative Study of Muhammad ‘Abduh and ‘Abbas Abdul-Baha.
Although the Baha’is helped Scharbrodt greatly in preparation of this work, but it is not welcomed by Baha’is after the publication, and critiques were written about it. Also some western writers who were familiar with Baha’ism have criticized the book. Denis Mac Eoin is one of those scholars whose critique of that book was published at the Bahai Research website.
Scharbrodt established the first “Study of Religions Department” in the Republic of Ireland, at University College Cork and was the founder of the “Chester Centre for Islamic Studies” at the University of Chester in England.
He is a member of the council of the British Association for Islamic Studies (BRAIS).
He also wrote the two following books:
“Muslims in Ireland: past and present”
“Yearbook of Muslims in Europe, Volume 7”
He wrote an article about Abdu’l-Baha’s treatise The Secret of Divine Civilization .
An interview was conducted with Dr. Scharbrodt during his trip to Iran, which its Persian translation presented here.

Determining the Successors by the Divine Prophets, and the Baha’i leaders

Determining a successor to pursue the goals and the path of leaders in the divine religions has been common and customary. The prophets introduced their successors to people according to God’s command during their lifetime. The same has been the case in the Baha’i Faith. However, in this Faith, despite determining the successor made by the leaders, other people have put themselves in this title and some followers have accepted these new leaders. From those who were put aside are Bab’s successor, Yahya Sobh-Azal and Mohammad Ali Efendi, the second successor of Baha’u’llah. Also, according to the Wills of Abdu’l-Baha, the continuation of the dynasty of the Guardians of the Faith( Wali Amr-ullah) should be of in the descendants of Shoghi Effendi’s elder sons. However, since Shoghi Effendi had no child and did not have any descendant, the leadership of the Baha’i community left in ambiguity.

Keyword:
The Will & Testament, Successor, Baha’i, the Guardians of the Faith, Mohammad Ali Efendi

Divisions and Disagreements in Baha’ism

Followers of the Baha’i Faith believe in unity and friendship with other religions. They provide a platform for the propagation of the Baha’i Faith by virtue of this beautiful slogan. One of the issues that can be checked in this Faith is whether this unity and non-divisibility exist in Baha’ism?
By studying the Baha’i works, we note that the Baha’i Faith has different branches and each of them call itself as the correct religion.
We see more splits in the Baha’i Faith than any other religion, in the small period of 150 years of its existence. These splits resulted from disagreements about successors of their leaders (Bab, Baha’u’llah, Abdu’l-Baha and Shoghi Effendi).
It seems that these splits and the inevitable violent consequences are incompatible with the claims of universal unity and universal peace. It seems the leaders of this Faith have failed to implement the teachings which they attribute to God.

Sen McGlinn is one of the Baha’i critics. He was an active member of the Baha’i community for 31 years. However, he was dishonored by the Baha’i International Center (Universal House of Justice – UHJ) due to his critical views about the Baha’i Faith. They decided to remove him from Baha’i community and exclude him from the list of the Baha’i members.
As a Baha’i intellectual, he sought to criticize, enlighten, clarify, and consolidate Baha’i thoughts and teachings. He wants to enable the Baha’is to understand Baha’ism better and to see what has this new Faith brought to the world? Does it have the ability to interact with the postmodern world?
We introduce Sen McGlinn in this article and look at his critical views on various topics.
He believes that the Baha’i rulings in the Bahaullah’s Book of Aghdas are defective and derived from the past religions and are out of date and horrible. For example, he claims the contradiction of the rulings about the equality between men and women and the exact ban on election of women on membership of UHJ.
He also believes that the UHJ should not interfere in political issues and it should leave it to the governments. He also criticizes the infallibility of UHJ and defines the responsibility of it only to legislation and enacting new religious rules.
Sen McGlinn does not recognize the Bahaism elections, and believes that they are pre-arranged .He suggests that the members of the Baha’i Continental Counselors and the International Propagation should not nominate for UHJ election, and the members of UHJ can be elected from the Baha’i National Assemblies.
Bahaism declares itself as a universal Faith, but lacking the appropriate system for modernism and globalization.
He warns the Baha’i administration about continuing the exit of Baha’i youth from the Bahai communities and not registering themselves. 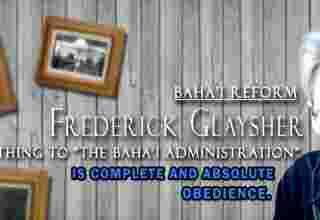