What can be understood from the lives of the divine prophets is that they made every effort to propagate and maintain the divine religion and ultimately implement the religion. Then, by God’s command, the successors were introduced to the people to continue that way. Baha’is who consider their faith as a divine religion claim that Baha-u’llah, introduced Abdu’l-Bah as his successor. And he had the utmost obedience, servitude, and devotion to Baha- u’llah. However, Abdu’l-Baha not only did not obey many of his commandments, but also added new commandments and issues that he had not said before, and even abrogated some of his commandments!

In addition, although the exact implementation of all the rules of a religion is expected from the Prophet’s successor, this is not the case in the Baha’i Faith, and ‘Abdu’l-Baha did not follow some of the rules of that Faith. Thus, the legitimacy of Bahaism , as well as the claim of  Abdu’l-Baha’s obedience is questioned or even is denied.

History according to Nabil, or just in the name of Nabil?

We also talked about the efforts of the Baha’is to establish and fix their own positions as the sole heirs of Mirza Ali Muhammad Shirazi and his religion. There was also a brief critique overview of the manner which faithful Baha’i historiographers practiced in the Faith and we made 8 objections to it.

This article introduces Nabil Zarandi’s History and the importance of this book.

Also the Shoghi Effendi’s translation of this book entitled The Dawn Breakers and its importance and authority in historiography of Baha’ism is examined.

Then, the authenticity of attribution of the translation of The Dawn Breakers  to Nabil Zarandi, nicknamed as Nabil Azam, is discussed.

Religion and the Challenge of Identity Building (Part 2)

The Relationship between “Value” and “Religion” in Trans-Theory Space

The description of religion and its attribution to the Baha’i Faith is one of the most important components of the Baha’i Political Philosophy. In the first part of this article, it was stated that Erfan Sabeti, by defining a new project, seeks to introduce the Baha’ism as a “new religious movement” or “world religion”. Part of his claim goes back to a re-reading of the fundamental epistemological presuppositions. Thus, the description of religion is the final synthesis of the paradigm shift from manifestation to transcendental theology, and then to the Secularization approach.

In this part of the present study, the methodology of the attribution of Baha’ism to religion category will be analyzed. Using the sociological method of constructivism, Sabeti first tries to reduce titles such as “religion” and “sect” to “Ideal types”, then, by presenting a minimal meaning of the concept of value, a new term called “new religious movement” is being introduced.

The claim of this paper is that the two concepts of “value” and “prescription” are among the most important and fundamental components of religion and should be evaluated from a scientific perspective, at the Meta-theory level. The moral Meta-theory space is an arena that measures the concept of “value”, and if Baha’ism are valued at that level, then it can be said that it is religious. Moral values are intrinsic and immortal; ideal laws belong to the realm of immutability, eternal and independent affairs. Instead of using the general and universal rules mentioned in the first part of this article, and instead of the Meta-ethics, Sabeti has tried to describe the “new religious movement” only from the approach of Secular values. But this argument is logically presented only at the level of theory, and therefore, is not measurable.

Baha’ism: From a denounced sects in Iran to an international organization

According to a sociologist, who, has spent about 25 years for studying Baha’i issues and some Western researches in this field, classifying the Baha’ism as a new religion, an Islamic sect, or a global movement is natural; because in the sociology of religion, the issue of typology of religious organizations and groups is a main and prominent topic. But in dealing with this group, one encounters fundamental challenges.

The unique dispersal of population, the Babi background, and the Islamic-Iranian conceptions of the Baha’i leaders, who had kept the same primary color of Middle Eastern culture in their assumptions; with the structures of an international organization, and globalist slogans of the group, along with the Bahai community’s multiple behavioral contradictions have been documented in the book Citizens of the World, and the opinions in this field have been reported according to academic principles. Excerpts from these topics, such as Non-worldly teachings and religious sanctifications, are presented in this article. In some cases, explanations outside the book Citizens of the World have been added.

Baha’ism from the viewpoint of the Christian Critics (Part 1) : Hermann Roemer

Hermann Roemer, a Christian scholar and writer, was born in Stuttgart, Germany. As a young man, he became acquainted with the Babi-Baha’i propagation activities, and began to and study it. Roemer wrote a magnificent research work in the field of the Babi – Baha’I Faith, and could shed light on its dark corners, especially in Europe. He describes the Babi – Baha’I Faith not as a divine religion, but as a dangerous political-religious cult, whose leaders used violence, terror, and the physical elimination of dissidents to achieve their goals. Roemer reveals the Baha’i histories and primary books as distorted ones, and believes that the texts and teachings of Baha’i leaders are adapted, censored, and revised in the light of historical events. By explaining the Baha’i history and the differences between the claimants to the leadership, he believes that the legal and religious rights of Subh –e- Azal have been usurped by his power-seeking half-brother (Hussein Ali).

While introducing the Aqdas Book (The Baha’i holiest Book) he believes that the full text of the book has been hidden from the views of the Baha’is and non-Baha’is for various reasons. Roemer does not accept the Baha’i founder’s infallibility and believes that he made many mistakes during his leadership. In addition, he denounces that Baha’u’llah has been imprisoned and exiled for 40 years as baseless. Hermann Roemer also believes that the Baha’is betrayed the national interests of the Iranians during the Iranian Constitutional Revolution with unrealistic idealistic cosmopolitan slogans. 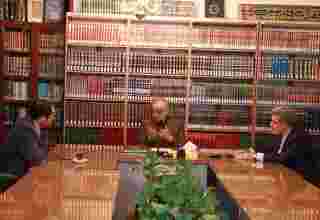